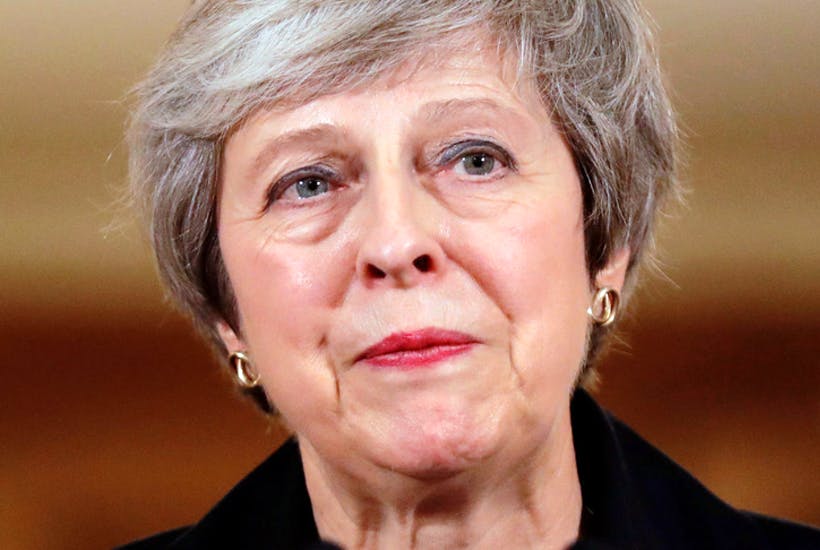 Just in case readers don’t have the time to go through the lengthly document themselves, Steerpike has compiled a list of the top 40 horrors lurking in the small print of Theresa May’s Brexit deal:

In summary: The supposed ‘transition period’ could last indefinitely or, more specifically, to an undefined date sometime this century (“up to 31 December 20XX”, Art. 132). So while this Agreement covers what the government is calling Brexit, what we in fact get is: ‘transition’ + extension indefinitely (by however many years we are willing to pay for) + all of those extra years from the ‘plus 8 years’ articles.

Should it end within two years, as May hopes, the UK will still be signed up to clauses keeping us under certain rules (like VAT and ECJ supervision) for a further eight years. Some clauses have, quite literally, a “lifetime” duration (Art.39). If the UK defaults on transition, we go in to the backstop with the Customs Union and, realistically, the single market. We can only leave the transition positively with a deal. But we sign away the money. So the EU has no need to give us a deal, and certainly no incentive to make the one they offered ‘better’ than the backstop. The European Court of Justice remains sovereign, as repeatedly stipulated. Perhaps most damagingly of all, we agree to sign away the rights we would have, under international law, to unilaterally walk away. Again, what follows relates (in most part) for the “transition” period. But the language is consistent with the E.U. imagining that this will be the final deal.

1) From the offset, we should note that this is an EU text, not a UK or international text. This has one source. The Brexit agreement is written in Brussels.

2) May says her deal means the UK leaves the EU next March. The Withdrawal Agreement makes a mockery of this. “All references to Member States and competent authorities of Member States…shall be read as including the United Kingdom.” (Art 6). Not quite what most people understand by Brexit. It goes on to spell out that the UK will be in the EU but without any MEPs, a commissioner or ECJ judges. We are effectively a Member State, but we are excused – or, more accurately, excluded – from attending summits. (Article 7)

3) The European Court of Justice is decreed to be our highest court, governing the entire Agreement – Art. 4. stipulates that both citizens and resident companies can use it. Art 4.2 orders our courts to recognise this. “If the European Commission considers that the United Kingdom has failed to fulfil an obligation under the Treaties or under Part Four of this Agreement before the end of the transition period, the European Commission may, within 4 years after the end of the transition period, bring the matter before the Court of Justice of the European Union”. (Art. 87)

4) The jurisdiction of the ECJ will last until eight years after the end of the transition period. (Article 158).

5) The UK will still be bound by any future changes to EU law in which it will have no say, not to mention having to comply with current law. (Article 6(2))

6) Any disputes under the Agreement will be decided by EU law only – one of the most dangerous provisions. (Article 168). This cuts the UK off from International Law, something we’d never do with any foreign body. Arbitration will be governed by the existing procedural rules of the EU law – this is not arbitration as we would commonly understand it (i.e. between two independent parties). (Article 174)

7) “UNDERLINING that this Agreement is founded on an overall balance of benefits, rights and obligations for the Union and the United Kingdom” No, it should be based upon the binding legal obligations upon the EU contained within Article 50. It is wrong to suggest otherwise.

8) The tampon tax clause: We obey EU laws on VAT, with no chance of losing the tampon tax even if we agree a better deal in December 2020 because we hereby agree to obey other EU VAT rules for **five years** after the transition period. Current EU rules prohibit 0-rated VAT on products (like tampons) that did not have such exemptions before the country joined the EU.

9) Several problems with the EU’s definitions: “Union law” is too widely defined and “United Kingdom national” is defined by the Lisbon Treaty: we should given away our right to define our citizens. The “goods” and the term “services” we are promised the deal are not defined – or, rather, will be defined however the EU wishes them to be. Thus far, this a non-defined term so far. This agreement fails to define it.

10) The Mandelson Pension Clause: The UK must promise never to tax former EU officials based here – such as Peter Mandelson or Neil Kinnock – on their E.U. pensions, or tax any current Brussels bureaucrats on their salaries. The EU and its employees are to be immune to our tax laws. (Article 104)

11) Furthermore, the UK agrees not to prosecute EU employees who are, or who might be deemed in future, criminals (Art.101)

12) The GDPR clause. The General Data Protection Regulation – the EU’s stupidest law ever? – is to be bound into UK law (Articles 71 to 73). There had been an expectation in some quarters that the UK could get out of it.

13) The UK establishes a ‘Joint Committee’ with EU representatives to guarantee ‘the implementation and application of this Agreement’. This does not sound like a withdrawal agreement – if it was, why would it need to be subject to continued monitoring? (Article 164). This Joint Committee will have subcommittees with jurisdiction over: (a) citizens’ rights; (b) “other separation provisions”; (c) Ireland/Northern Ireland; (d) Sovereign Base Areas in Cyprus; (e) Gibraltar; and (f) financial provisions. (Article 165)

14) The Lifetime clause: the agreement will last as long as the country’s youngest baby lives. “the persons covered by this Part shall enjoy the rights provided for in the relevant Titles of this Part for their lifetime”. (Article 39).

15) The UK is shut out of all EU networks and databases for security – yet no such provision exists to shut the EU out of ours. (Article 8)

16) The UK will tied to EU foreign policy, “bound by the obligations stemming from the international agreements concluded by the Union” but unable to influence such decisions. (Article 124)

17) All EU citizens must be given permanent right of residence after five years – but what counts as residence? This will be decided by the EU, rather than UK rules. (Articles 15-16)

18) Britain is granted the power to send a civil servant to Brussels to watch them pass stupid laws which will hurt our economy. (Article 34)

19) The UK agrees to spend taxpayers’ money telling everyone how wonderful the agreement is. (Article 37)

20) Art 40 defines Goods. It seems to includes Services and Agriculture. We may come to discover that actually ‘goods’ means everything.

21) Articles 40-49 practically mandate the UK’s ongoing membership of the Customs Union in all but name.

22) The UK will be charged to receive the data/information we need in order to comply with EU law. (Article 50)

24) The UK will effectively be bound by a non-disclosure agreement swearing us to secrecy regarding any EU developments we have paid to be part. This is not mutual. The EU is not bound by such measures. (Article 74)

25) The UK is bound by EU rules on procurement rules – which effectively forbids us from seeking better deals elsewhere. (Articles 75 to 78)

28) The UK is bound by EU state aid laws until future agreement – even in the event of an agreement, this must wait four years to be valid. (Article 93)

29) Similar advantages and immunities are extended to all former MEPs and to former EU official more generally. (Articles 106-116)

30) The UK is forbidden from revealing anything the EU told us or tells us about the finer points of deal and its operation. (Article 105).

31) Any powers the UK parliament might have had to mitigate EU law are officially removed. (Article 128)

32) The UK shall be liable for any “outstanding commitments” after 2022 (Article 142(2) expressly mentions pensions, which gives us an idea as to who probably negotiated this). The amount owed will be calculated by the EU. (Articles 140-142)

33) The UK will be liable for future EU lending. As anyone familiar with the EU’s financials knows, this is not good. (Article143)

34) The UK will remain liable for capital projects approved by the European Investment Bank. (Article 150).

36) And the EU continues to calculate how much money the UK should pay it. So thank goodness Brussels does not have any accountancy issues.

37) The UK will remain bound (i.e coughing up money) to the European Union Emergency Trust Fund – which deals with irregular migration (i.e. refugees) and displaced persons heading to Europe. (Article 155)

38) The agreement will be policed by ‘the Authority’ – a new UK-based body with ‘powers equivalent to those of the European Commission’. (Article 159)

39) The EU admits, in Art. 184, that it is in breach of Article 50 of the Lisbon Treaty which oblige it to “conclude an agreement” of the terms of UK leaving the EU. We must now, it seems, “negotiate expeditiously the agreements governing their future relationship.” And if the EU does not? We settle down to this Agreement.