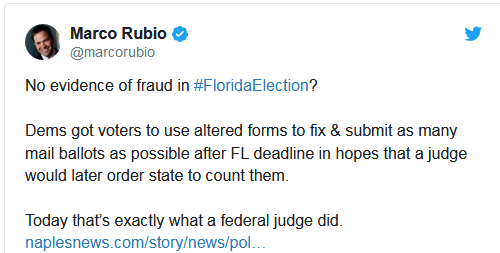 The email was sent out to Democrat activists BEFORE Nelson and his party allies filed a series of lawsuits challenging some voting rules that applied during the election, claiming they disenfranchised voters.

A federal judge then ruled in Democrat’s favor to count these votes.

A day after Florida’s election left top state races too close to call, a Democratic party leader directed staffers and volunteers to share altered election forms with voters to fix signature problems on absentee ballots after the state’s deadline.

The altered forms surfaced in Broward, Santa Rosa, Citrus and Okaloosa counties and were reported to federal prosecutors to review for possible election fraud as Florida counties completed a required recount in three top races.

But an email obtained by the USA TODAY NETWORK – Florida shows that Florida Democrats were organizing a broader statewide effort beyond those counties to give voters the altered forms to fix improper absentee ballots after the Nov. 5 deadline. Democratic party leaders provided staffers with copies of a form, known as a “cure affidavit,” that had been modified to include an inaccurate Nov. 8 deadline.

The Naples Daily News posted a copy of the Democrat instruction form to voters.